Bob Battle lives in and his office is located in Henrico County, Virginia. There are 5 different General District Court judges who hear these DUI misdemeanor cases and Preliminary Hearings for Felony DUI charges. If you are contacted by or see an internet ad by a lawyer who claims to be experienced in Henrico County and their law firm does not list an (804) area code phone number, give them this simple test. Ask them how many General District Court judges there are in Henrico County and what are the names of the judges. An experienced Henrico DUI lawyer would be able to answer this off the top of their head. Someone who runs statewide Google AdWords campaigns or litters the entire state with mail solicitations won't have a clue.

If the lawyer doesn't pass this basic test hang up on them. If they do, then Bob Battle has written a free Consumer Guide that arms you with all the additional questions you should ask in order to decide on which lawyer is the best choice for your DUI case. Fill out the form at the bottom right-hand side of this page and we will immediately send you a copy of the book "How to Choose a DUI Lawyer in Virginia."

For over 30 years, Bob Battle has been a trial lawyer in Virginia. Although case results vary and depend on the facts, it is a certainty you can't win an issue that your lawyer doesn't raise and recognize on your behalf. 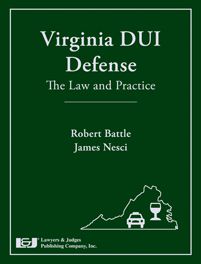 More Honors and Awards for Bob Battle in 2016

Bob Battle was honored to be voted “One of Richmond’s Best DUI Lawyers" and one of the "Top 10 DUI Lawyers in Virginia" in 2016 and also being asked to update his text book on DUI Defense in Virginia “Virginia DUI Defense: The Law and Practice.” This book which was originally published in 2012 has received glowing reviews from Virginia lawyers who wish to increase their knowledge of sophisticated DUI defense tactics used by the top DUI lawyers.

by Bob Battle Bob@BobBattleLaw.com
Connect with me
100% of my practice is devoted to serious traffic defense and criminal litigation in state and federal courts

How to Choose a DUI Lawyer in VirginiaRequest Information

Need Help? Have Questions? Fill out the quick contact form below and we'll will be in contact soon!