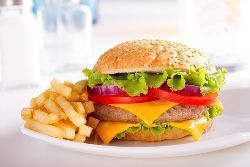 My of-counsel for Richmond Virginia car accident cases, Ben Glass, recently settled a case for a woman who was injured in a car accident in Chesterfield, Virginia. Prior to consulting an attorney, she had conversations with the insurance adjuster from the insurance company of the driver who had rear-ended her and caused her injuries. The insurance adjuster offered to meet her at McDonald's for lunch to settle the case. The woman realized at this point that if she wanted fair compensation for her injuries, that she should hire a lawyer.

To read more from Ben Glass about the specifics of her injuries, click on "Saved from a lunch at McDonald's after Richmond VA Car Accident."

A couple of comments about this case. First, we strongly recommend that anyone who is injured get our free books which help to explain the personal injury process and the process of hiring a lawyer before they talk to any adjuster or sign any forms. Fortunately, this woman wised up before her lunch because this insurance adjuster was getting ready to play the Hamburglar and get her to sign for way less than her case was worth. Once she signed the settlement forms, the case  would have been over and she would not have been able to collect another dime.

Also of significance in this situation is what the other "settlement mill" personal injury law firm was attempting to pull over on this woman to take extra money out of her pockets and transfer it into the coffers of the big personal injury firm. Specifically, the firm matter-of-factly told this woman that in addition to their “standard” one-third contingency fee there was also an 8% “file handling” charge. The vast majority of people have never been injured in an accident and are unfamiliar with what is and is not “standard." There is nothing standard about this extra 8% fee and it is merely a way for the law firm to take $800 out of every $10,000 of the settlement out of the victim's pocket and put it into the law firm's pocket. It seems these law firms are borrowing a trick from car dealerships. Last weekend, my wife purchased a new car. After agreeing on the price and agreeing to pay cash for the car with no financing, we still were directed after a lengthy wait into the office of the finance guy. He explained to us the "horrors" of acid rain and bird poop on the exterior of the car and, apparently mistaking me for Dexter, warned that we needed protection on the interior of the car for, among other things, "blood." After we had declined, somehow without laughing in his face, his offer to give us these protections for a mere $795, he took off another $300 which we again quickly declined. After this process was over and we were driving home, my wife and I explained to our 8 and 12-year-old boys that basically they were trying to get us to pay $500-$800 for a wax job and spraying the interior with Scotchgard. I don't begrudge anyone to try to make easy money or adding more money onto a sale, but I certainly am going to also educate others like my young boys on exactly what is happening. Similarly, my law firm and my of counsel partner Ben Glass will continue to educate consumers on tricks that insurance adjusters and large personal injury law firms are using to keep them from getting the maximum amount of compensation they deserve.

Every case is different and the outcome depends on the facts, but this is one case where this woman who didn't like what the insurance adjuster and the big personal-injury firm were telling her, wisely cancelled lunch at McDonalds because these companies were more interested in  “Supersizing” their own bank accounts than maximizing her recovery.